I don’t like the feel of slime and neither did my son!

For some reason he repeatedly asked me to make snow slime.

My only guess is that he liked making things and mixing concoctions.  I knew if we made slime he wouldn’t want to play with it so I put the activity off, enticing him with other fun things to do.  Still, he asked to make the slime every week.

Pretty soon we started searching Valentines activities to do together.  We look for eye catching pictures of super fun activities from our favorite blogger mommas and their children.

The pictures of the slime were AWESOME!  The mommy of Little Bins for Little Hands posted pictures of different colors!  She had the amazing idea of adding fun objects to add texture to the    stuff!!  AND there were pictures of kids just like my son PLAYING happily with it!  Oh, he was determined to make Valentines Day Slime now….even though he didn’t want to touch it.  OR did he? 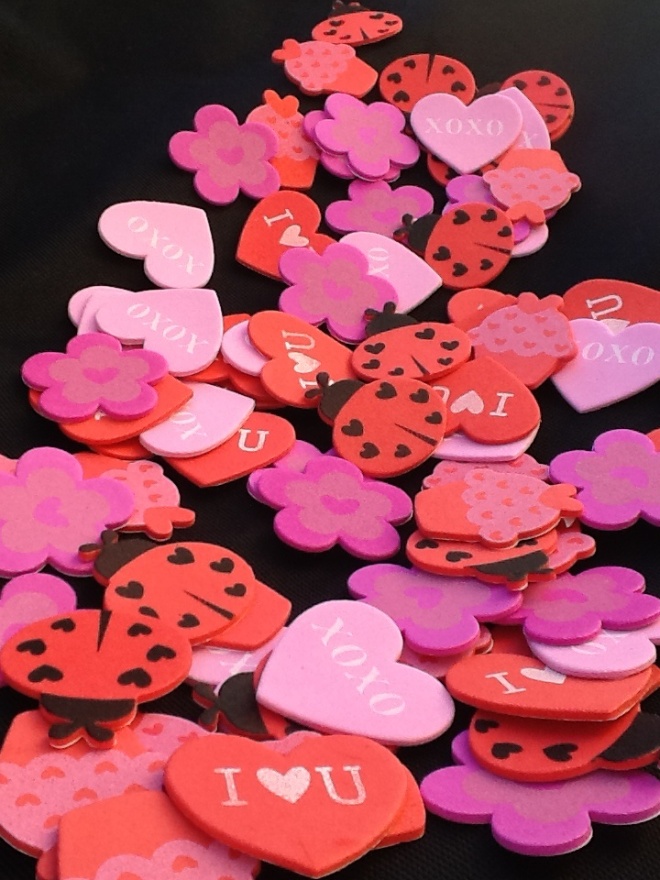 I credit and thank Little Bins for the AMAZING visuals that gave PJ a boost in courage he needed to actually play with the slime.

I used her formula for the slime as a starting point but used a different brand of glue.  The dollar store version is much thinner than Elmer’s glue.  Here is a link  to her    slime recipe if you are using Elmer’s glue.  http://littlebinsforlittlehands.com/liquid-starch-slime-easy-sensory-play-recipe/.   Sorry I’m having trouble with links again but I will fix it soon! 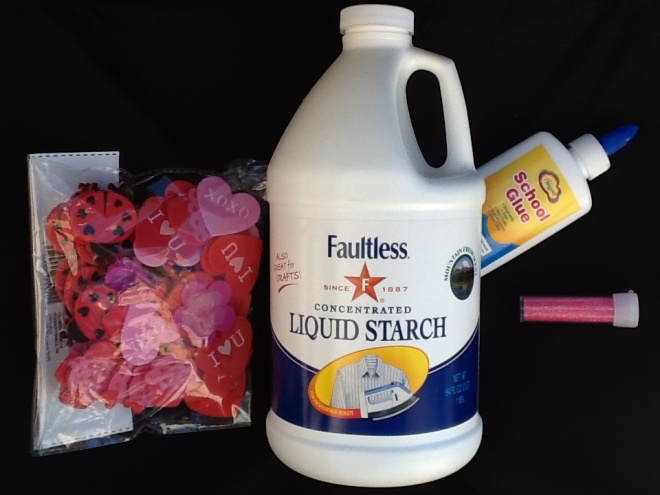 I let PJ help make the slime just like he had seen from one of his favorite sites.  Glue then water and stir-stir-stir. 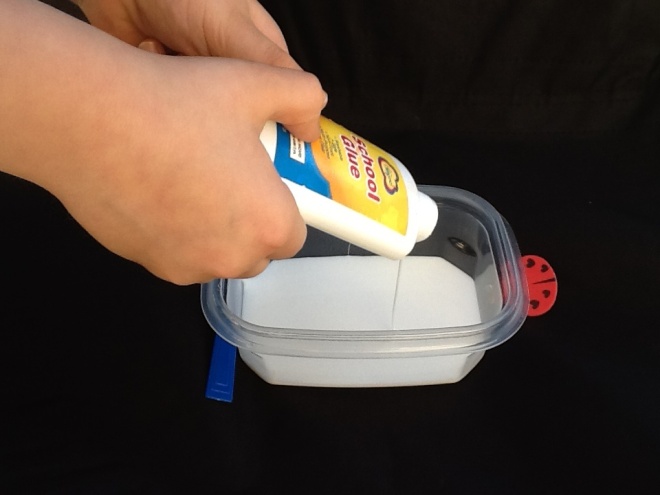 He added red food coloring. The swirls of red against the white glue were mesmerizing!!  (We really need to do a milk color mixing experiment of some kind soon.) 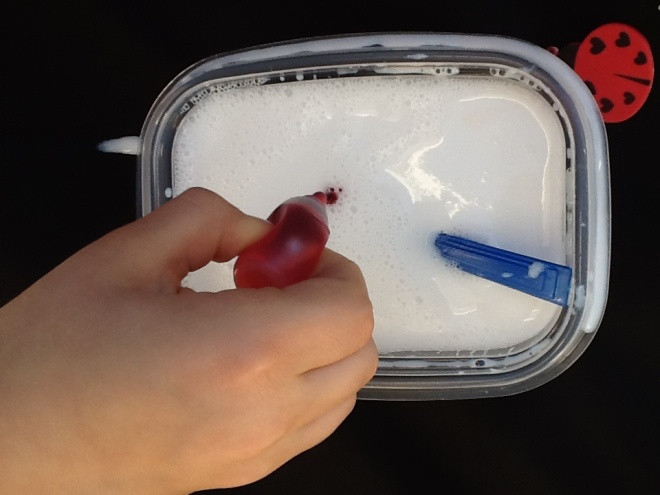 I let him add all the glitter of his choice and he stirred again.  The color was beautiful!  PJ kept poking his finger in it half wondering if it was slimy yet and half  captivated by the shimmery glitter.

I poured the water glue froth mixture into a larger container then we added the liquid starch.  This time PJ poked it with a spoon. 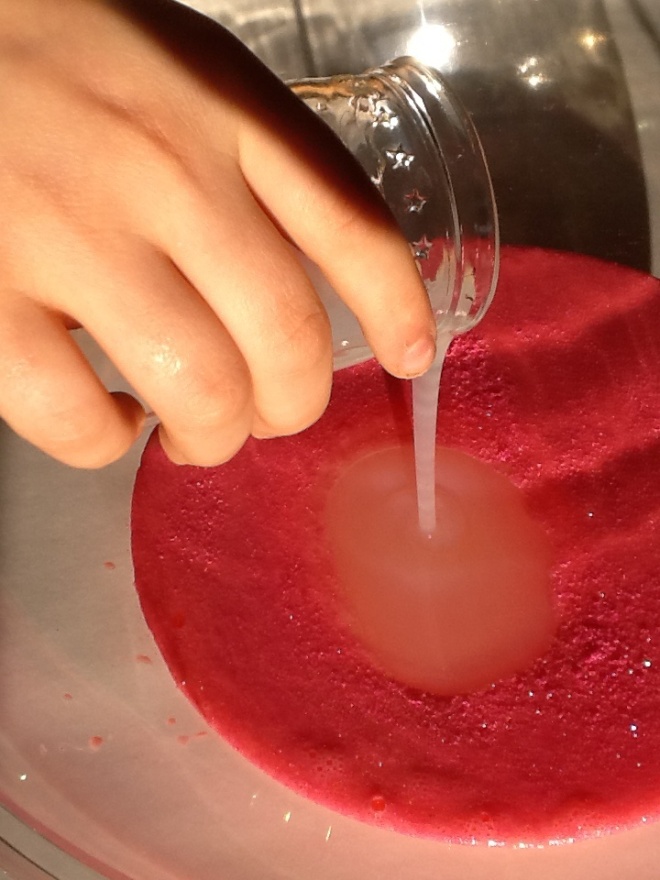 Then he stirred the blob of starch around a bit and left the heavy mixing to me.  Yukkk-o!  No wonder he didn’t want to mix it by hand.  It’s very stringy and sticky in the mixing stage.  After you let it sit a bit the mix becomes a whole blob of slime.

And sit it did.

The slime formed air pockets that rose to the surface.  This intrigued PJ so that he tried to pop the bubbles by throwing the foam valentine counters in the bowl.  He still didn’t want to touch the slime. 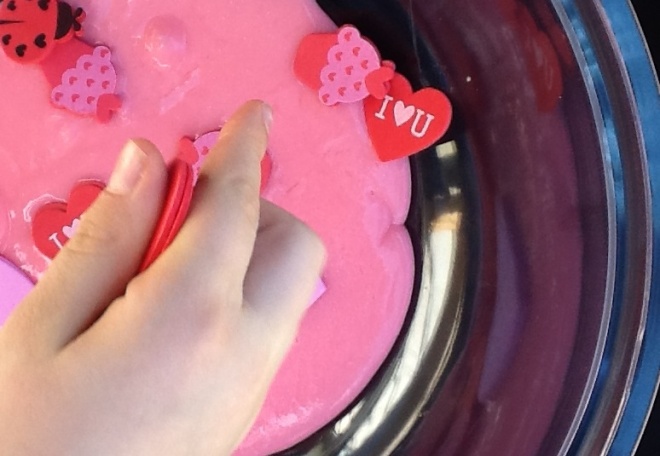 I encouraged him, “Try popping it with your finger.” But slime bubbles are tougher than say soap bubbles.  He tried once then again and that was enough ‘grossness’ for him.  So I sat the bowl of slime on the kitchen table and started in making brownies.  PJ headed for his LEGOs and started building.  Oh well, we had fun making it I thought.

After a few minutes he came to the kitchen table and peered into the bowl.  Legos in one hand, he shook the bowl a little and walked away.

10 or so minutes later he came and shook it again.

This coming to explore the slime and leaving again went on for over an hour.

Until finally he reached in and popped that bubble!!!

He got a bit of slime stuck on his finger.  He rolled it around on his hand, explored the feel of it, and put his whole hand in the slime.  I was excited for him! 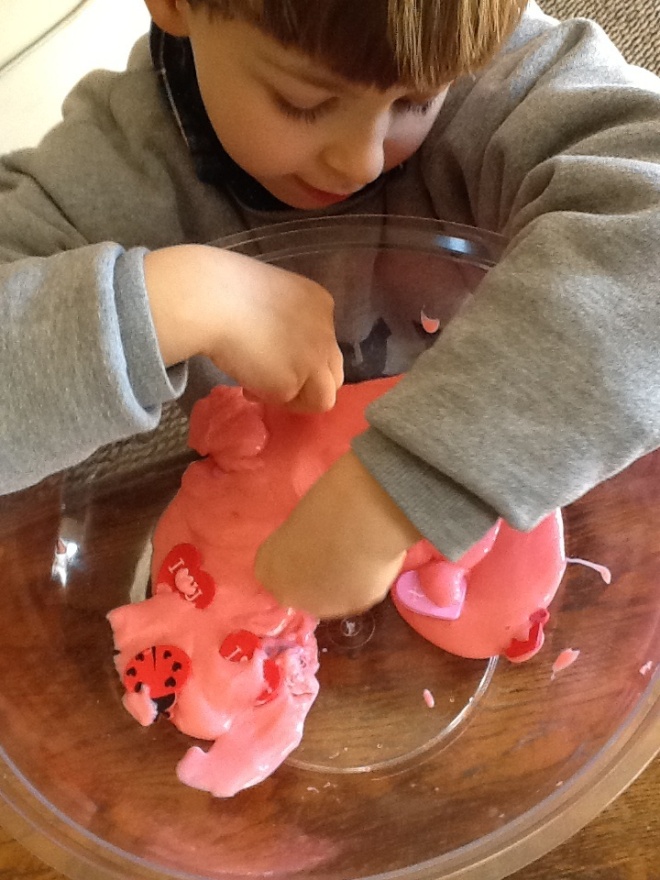 PJ enjoyed playing with the foam pieces and pretending that the ladybugs could talk to each other!  He made them fly high in the air and splat back into the slime:)

He even went as far as to tell me to take pictures of the slime.  My future blogger?

I hope you’ve enjoyed reading about our experience making and PLAYING with slime!  Does your child like to play with slime?  Please comment below.  We’d love to read about it!! 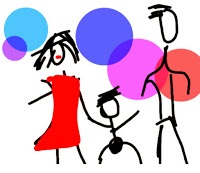 Hi! My name is Crystal. I am a mom of two. My daughter is 18. My son ,who attends public school, also needs a little extra help afterschool. This blog is all about how we keep learning fun at home as an extension of his school day and during school breaks. View all posts by Theafterschoolhouse

This site uses Akismet to reduce spam. Learn how your comment data is processed.